3D Warehouse and CraftMaster:
Unlocking a wealth of Minecraft-relevant content

Building structures in Minecraft from scratch, block-by-block, can be really fun and fulfilling. It can also be difficult and time-consuming. In some circumstances - for example, a classroom setting with limited time - you may not have the luxury to build complex structures one block at a time. Well, you no longer need to - one of the coolest features of CraftMaster is the ability to import 3D models into your Minecraft worlds. By doing so, you can leverage the creativity and hard work of skilled 3D designers, engineers, and architects from around the world to quickly produce amazing Minecraft content. 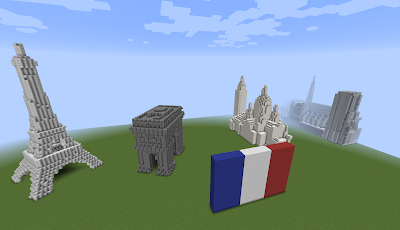 CraftMaster can import 3D models in many different data formats - OBJ, COLLADA, and KMZ, to name a few. It can also import 2D images, such as PNG and SVG files - we’ll discuss that in a later blog. In the meantime, just like with 2D images, there are many sites on the Internet where you can find free, downloadable 3D models. A quick search for “free 3D models” on Google will give you a idea of how much content is out there. One of my favorite sites, and a virtual treasure trove of 3D content that is relevant to Minecraft, is SketchUp’s 3D Warehouse.

SketchUp is an easy-to-use 3D modeling tool that allows you to design 3D objects by drawing - much the same way you might sketch out 3D objects using pencil and paper. SketchUp was originally developed by a start-up called @Last software, based in in Boulder Colorado. In 2006, @Last Software was purchased by Google - in large part due to their support for a Google Earth plug-in for SketchUp - and then in 2012 SketchUp was acquired by Trimble Navigation, its current home.

SketchUp is used by architects, designers, builders, makers and engineers. It is also used by universities around the world to teach 3D modeling, design, and architecture. For those tens of millions of people who use SketchUp every year, SketchUp hosts a library of 3D models called 3D Warehouse. It's the most popular 3D content site on the Internet, with over 3 million models, and it's 22 million yearly visitors rack up nearly one billion page views and 230 million downloads annually. Anyone can upload, download, and modify content from 3D Warehouse completely free of charge.

For Minecraft users, what makes 3D Warehouse so compelling is the range and relevance of the content hosted there. Virtually every iconic building, monument, and statue in the world is hosted on 3D Warehouse. In addition, there are vehicles, space ships, animals, and much, much more. And, best of all, access to 3D Warehouse is built right into CraftMaster. To get a sense of the type and range of content available, check out the the CraftMaster demo world video - every structure in this demo world was downloaded from 3D Warehouse, converted and placed into Minecraft using CraftMaster.

Anyone who has attempted to build large complex structures knows it can be a long and painstaking process - it may take hours to get it right. Using CraftMaster, the time is takes to find, download, convert, finish, and place a complex model into a Minecraft world can be as little as a few minutes.

After downloading the model using CraftMaster, I finished it by first resizing it to 65 blocks tall (on the Y-axis) - thus making it big enough to see all of the detail. Next, I reduced the model to a single color, and then selected Iron Block as the material for the entire model. 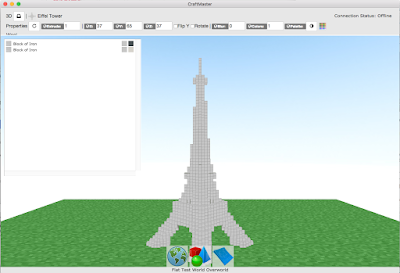 With CraftMaster, it’s easy to place the model wherever I want it in a Minecraft world - it’s pretty cool seeing the Eiffel Tower just outside a village. 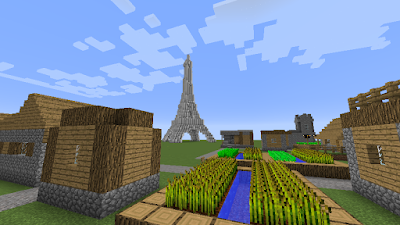 With millions of models and an unlimited range of possibilities for finishing them using CraftMaster, you can look forward to hours upon hours of exploration and fun. And, your Minecraft worlds will never be the same.

Please subscribe to our blog for additional tips, tricks, and inspiration for how you can amplify your creativity using CraftMaster.

Posted by CraftMasterAndy at 3:57 PM No comments:

Phew, what a wild ride it was last weekend at MINECON 2016 in Anaheim! The CraftMaster booth was located in the exhibit hall, right next to the Mesa Biome and not far from the MINECON Store, which had a huge line most of the weekend (something about a purple sheep!). 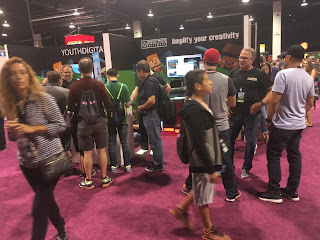 Our booth was crowded pretty much the whole time. We had live demos of CraftMaster and a new demo video on display (check it out on our YouTube channel: https://www.youtube.com/c/CraftMasterSoftware).

Visitors were quite impressed with the cool stuff you can build using CraftMaster, and the ability to share their creations via Sketchfab to Facebook and Twitter. "Wowwww!" was a common reaction—especially from kids who saw how easy it was to build iconic structures by importing 3D models into their Minecraft worlds. Michael Calvert, the gaming evangelist from Sketchfab, was on-hand and brought free buttons and stickers.

What an amazing crowd MINECON attracts! People of all ages and backgrounds - adults and kids, girls and boys alike. We met people from all over the United States and around the globe - as far away as Australia and New Zealand and even a couple of folks from Spain! What's most memorable, though, is the energy of the show - so positive, such a high level of enthusiasm, and fun! Anyone who thinks that Minecraft is your typical video game needs to go to a MINECON show.

The highlights from the weekend included our two drawings for Xbox One game consoles with Minecraft. The Saturday winner was Mark Glotfelty from New York City, who attended the show with his son. When he found out he won, Mark's e-mail response was: "I can't believe it!! This is very exciting. I hope you are not pulling my leg." And, on Sunday the winner was Jody Novakosky, founder of GamED Academy. You can read her heartwarming Minecraft story here: http://gamedacademy.com/our-story/.

All in all it was a great weekend for CraftMaster Software. Thanks to everyone who stopped by to say hello!!

What did you think of the show? We'd love to hear your comments...
Posted by CraftMasterAndy at 4:31 PM No comments:

Hello and welcome to the CraftMaster Software blog! Here we'll share our observations, talk about what we're currently working on, offer some sneak peaks, and generally engage with you, our users. First some background on who we are…
CraftMaster Software officially came into being in September of 2015. But the genesis of the company was earlier than that. CraftMaster grew out of the joy we experienced playing Minecraft™ together and with our kids, not to mention Pete's tinkering with various custom Minecraft extensions, which has been going on for years.As you probably know, Minecraft is a global phenomenon, with over 100M users and the momentum keeps going strong. You may also know that Minecraft is not your typical video game - rather, an open-ended platform to explore, solve problems, be creative, and much more. In April of 2016 the New York Times Magazine published an extensive article that profiled the Minecraft phenomenon with a particular emphasis on its usage in education settings. It’s a good overview and definitely worth reading:http://www.nytimes.com/2016/04/17/magazine/the-minecraft-generation.htmlSince we come out of the broader 3D technology industry, we like to think of Minecraft as the most pervasive 3D modeling tool in the world. Within this context, we've long believed that if we could create a portal that allowed content to flow freely between Minecraft and the broader 3D technology ecosystem, both communities would benefit enormously.This is our goal for CraftMaster. And our vision is starting to come into focus. In fact, we're getting ready to launch the beta versions of our first products at Minecon 2016. So, the next phase of our journey is about to begin.
In the meantime, please visit our web site (www.craftmastersoftware.com) to sign up for our beta program, or just to get on our e-mail newsletter list.We're looking forward to sharing that experience with you!Pete, Andy, and KevinCo-founders, CraftMaster Software

Posted by CraftMasterAndy at 10:25 AM No comments: